The Awkwardness of Burlesque at Midday on a Wednesday 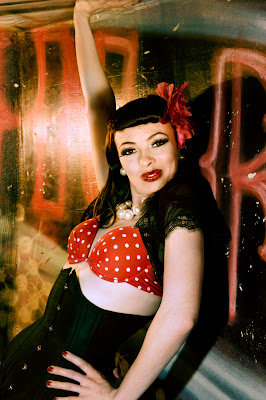 We had spent an hour idly flicking through racks of over-priced dresses in Monsoon, checking out the jewellery in New Look and sorting the tat from ‘that’s actually quite nice’, and even popped into an outdoorsy shop to have a look at suitable walking trousers for a camping weekend (I don’t camp. I lost a bet.)

We kept looking at our watches. ‘Do you think it’s too early to go now?’ my friend asked hopefully. ‘Yes. It doesn’t open until 12pm. Let’s just have another little walk round and then maybe it’ll be time,’ I replied. My other friend complained that her stomach was growling and she just wanted to sit down and eat. And get away from the ridiculous rainy weather (this is August?). Oh and watch the burlesque show.

Yes, we had a booking at a burlesque club. It actually likes to call itself a ‘glamorous supper club’. We had a booking there at midday on a Wednesday. Because that’s what you do on a Wednesday lunchtime, right? Treat yourself to a three-course meal, have a bottle of wine, and watch an attractive man sing and tickle the ivories and an attractive woman sing and, well, take her clothes off.

My two best friends from school and I had taken the day off. Some shopping and a fancy lunch. Volupté seemed like a good place for a fancy and, well, different kind of lunch.

We arrived at 12.05. They weren’t ready for us yet. Oh. We hopped onto the bar stools in the ground-floor bar and waited to be told that our table downstairs in the ‘glamorous supper club’ was ready. At 12.20 we were led downstairs into the steamy kinky lair; although it wasn’t actually that steamy. Or kinky.

The place was completely empty. The décor was suitably glamorous and a little racey – red and purple wallpaper, a red lampshade with a lady’s legs as the stand, a few saucy pictures on the wall, a grand piano - but the atmosphere was subdued, not steamy.

By 12.45 we had been joined by a few other souls seeking some midweek thrills. Two couples, two older ladies and one man sitting on his own. Enough people so our loneliness vanished but not enough to make the awkwardness disappear. More of that in a moment.

First, the food. £12 for two courses. £15 for three courses. Very reasonable. And very tasty. As my friend (the one with the noisy stomach) declared: ‘Volupté isn’t shy with the entertainment and not shy with the flavours either! Make sure you put that in the review.’ So here it is in the blog (I had to put it in – she’s a policewoman, who knows what she would have done if I hadn’t).

The pea soup to start was frothy, creamy and luxurious. Perfect for a slightly chilly August day. A large portion of fishcakes was my friends’ choice of starter – pretty presentation, punchy fishcakes and a fresh and spicy salsa, they commented.

The mains were good too – the PC thought the prawns with sapphire were a success. And the puds were lovely: squidgy brownies with smooth pistachio ice cream, and refreshing and tingly raspberry and elderflower sorbets. 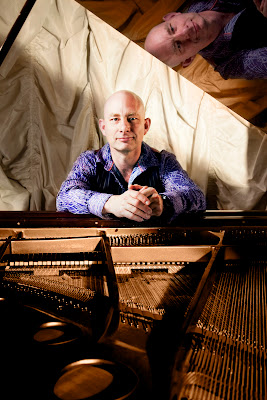 While we were wolfing down (alas, nothing has changed since school, we do still ‘wolf’ – what would our headmistress say?) our mains, the entertainment started. A petit redhead was our hostess. We were so hopeful, so optimistic, that the atmosphere would perk up and we would forget that there were only 10 people dining and watching these loud and saucy acts, that it wouldn’t be awkward. I mean, she was a good hostess. And the acts were pretty good. But it all just felt rather forced. We were a shy audience, reluctant to engage in the bottom spanking and rowdy rounds of applause that our hostess begged of us. It was a bit cringey. My friends were a bit embarrassed. ‘Don’t be silly, don’t be a prude, don’t be embarrassed,’ I scolded, being the cool, liberal, glamorous type that I am. But I was a bit embarrassed actually.

We were treated to Miss Bounty Hunter, all red wig and red glitter lipstick. She danced and jiggled her chest and took her clothes off about two feet from our table. I smiled and nodded and did my best to be the cool, liberal, glamorous type, and not look like a perv or a prude: it’s a hard act to get right.

Anthony Strong came on and did some sexy jazz on the big piano. It was a bit easier to wolf and chatter and not be forced to walk the fine line between perv and prude with Anthony.

Miss Bounty Hunter bounced back on. Uh-oh. And so the next hour or so went.
Although the acts were good, and for the price the food was excellent, I think a trip to Volupté at a more normal ‘glamorous supper club’ time like Friday or Saturday night would be an altogether more steamy, kinky, glamorous and less awkward affair. I will be back – but not at midday on a Wednesday.
Christian Rose-Day at 18:18
Share