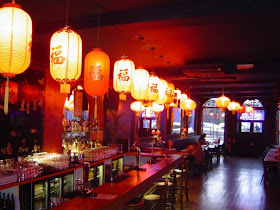 A £12 trip to the cinema (prices in London currency) will get you one adult ticket plus either part of a tub of popcorn, a cup of not-quite-as-nice-as-a-can-of-Coca-Cola pop, or about six penny sweets. This level of restraint doesn’t exist in the real world, so you’ll inevitably blow about 20 quid each on a load of ulcer-inducing food and drink and probably end up wishing you’d waited for the film to come out on DVD instead.

Perhaps that’s just me. The point to my little rant is that if you head down to The Drunken Monkey bar in Shoreditch on every third Wednesday of the month, you can catch a film, some freshly made dim sum, and a comfortable, un-flip-uppable seat, all for £12. Or less, because the films are screening for free. The £12 is for the special set menu, so really – if you’re savvy (read ‘skint’) like me – you could grab some crisps and a beer and settle down for an even cheaper night out.

The newly-launched Chick Flick evenings kick off at 8pm and feature a range of films from Grease to Sex and the City. Not the current Box Office chart toppers, but a good selection of pleasers all the same. Men are allowed too, though the testosterone-fuelled Karate Film Nights The Drunken Monkey is planning to launch might be more up their street.

My friend Victoria and I headed to the Breakfast at Tiffany’s screening last Wednesday. Stopping off in the red lit bar upstairs first for an after work catch-up and a couple of drinks. We headed downstairs to watch the film just after the opening credits had rolled, which meant that the only seats available were at a booth in the corner. We had a partially obstructed view of the big screen – there’s a smaller one too but it was behind us – and struggled to hear properly over a noisy fan. Everyone else, a relaxed bunch of about 30-odd people in their 20s and 30s, were all comfortably settled in to much better positioned seats and seemed to be happily tucking into the numerous dishes, delivered by the on the ball waitresses going and back and forth attentively throughout the eve. 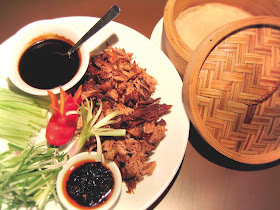 Going along with the girls’ night out theme, we ordered a couple of cocktails. They start at a low end city price of just over £6 which, for the massive and really delicious Pineapple Monkey Mojito we had each, was very reasonable. The aforementioned 10 piece set menu featured a selection from their main menu, also a good deal, though with prices ranging £3.50-£5 per dish it wouldn’t break the bank to sway from that. We sampled the steamed King Prawn Dumplings – so good we ordered another round; Chilli Salt Fried Squid, Duck Spring Rolls and a couple of Sticky Rice Parcels with Chicken and Pork – all really fresh, non-greasy and moorish.

Despite our partially obstructed view, we did actually enjoy ourselves and would head there again. It’s a great concept, but I advise getting there early. Upcoming Chick Flicks include When Harry Met Sally (Oct 20th), Sex and the City (Nov 17th) and The Holidays (Dec 1st).

Check out The Drunken Monkey bar in Shoreditch.
Christian Rose-Day at 13:04
Share