A Key To Unlock Jub Jub’s Secret Bar in Shoreditch 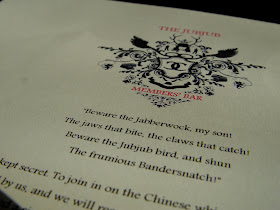 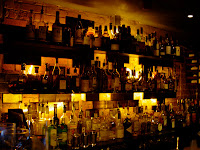 By Christian Rose-Day and Flick Hardingham.

A key to a secret bar: cool as fek or just a little bit wanky? I’m of the ‘cool as fek’ school of thought which is why I was in such a kerfuffle about getting my hands on the blasted key that would get me in the door of the opening party of the secret Jub Jub bar at Callooh Callay in Shoreditch, only the key had seemingly been given to my editor to pass onto me and he’d left it in his other jacket. Yikes! Having never been to Callooh Callay before, I was was eager as chips to have a nosey around, especially as it had been suggested to me several times recently when I began researching London’s Top 10 Coolest Bars. No key, no cool, all palaver! 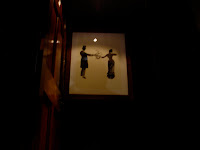 Thankfully, the ghost of Lewis ‘Alice in Wonderland’ Carroll - the author whose ‘Jabberwocky’ poem was the basis for both the Callooh Callay and Jub Jub bars - was assuring my luck, and made it so for me to join the party without the need of said key. Had this been any other ordinary Wednesday night, however, I may not have been so lucky because the essential idea behind the secret Jub Jub bar is that one must be in possession of a key in order to enter.

Callooh Callay’s cosy hideaway is hidden through the downstairs wardrobe, passed the wall of cassettes, and up a secretive set of stairs. The essence of Lewis Carroll lives on in the bar with a Flamingo bird, a bed head chaise lounge, a haunting clock face, and some intriguing artwork by Dan Hillier. Plus, of course, there’s a bar brimming with a truly stand-out selection of spirits. 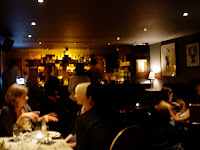 As I tucked into my first cocktail I realised I had fortuitously sat right next to Dora and Boris of the Mo Group, the very architecture and design team who had dreamt up the whole Callooh Callay concept. Naturally, intrigue got the better of me and I had a few questions I needed to ask:

What inspired you when you were designing the bar at Callooh Callay?
Dora: Our design took inspiration from Lewis Carroll’s mysterious and surreal texts.

Is there anything at Callooh Callay that you're particularly proud of?
Dora: Building the ambience, I think (hope) we succeeded in achieving this ‘calculated madness’ feel to it. Alice in Wonderland styled interior plays with the elegant exaggerations and the sophisticated mischief of an eclectic Victorian style and we really enjoyed working with this theme.

What was your favourite cocktail tonight?
Dora: 'Fancy that' (42 Below passionfruit vodka, Aperol, lemon juice & Prosecco)

What makes the perfect bar?
Dora: As our lush professor of architecture would say...'A badly lit space allowing you to develop an intimate relationship with the rim of the glass'...Or...hopefully the contents of the cocktail glass say what the bar wants to say - a perfectly design bar needs to extend that relationship...into three dimensions? As you can see I got carried away here...

What is YOUR favourite bar in London?
Dora: I like Indo on Whitechapel Road, mostly because it's conveniently located. Joking of course-it's at least 7 minutes walk from the tube! 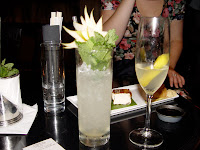 After that (and our second cocktail) the conversations spiraled around playful topics such as the comedic genius of Aussie sitcom ‘Kath & Kim’, the concept of making up your own surname once married, and the manliness of a cocktail served in a goblet. One such drink was the potent Derby Teaser, equal parts Wild Turkey bourbon, tangerine marmalade and intergalactic rocket fuel, by my reckoning. I chose it not only to kick start my evening with a whoosh, but to taste a bourbon creation made by the hands of the World’s Bourbon Champion. This is because on this particular night the guest bartender was exactly that, and her name was Andrea Montague.

Ms Montague’s skills were not restricted to the smoky realms of Kentucky, however, and her considerable talents were most welcome in the XM 10 year rum, Chipotle syrup, and Angostura bitters cocktail known as The Diplomat. Her greatest achievement of the evening, though, came when my Fluid colleague Flick gave Ms Montague the brief of “I fancy something short, bitter, and manly”, to which Ms Montague replied with an off-menu bespoke drink using a moreish mix of rum, benadictine, averna, ginger beer and an orange twist. Being an infant cocktail (not for infant consumption, obviously) the drink was yet to be named, so Flick coined it The Anonymous Rug. Lewis Carroll would have approved.

Each week the Jub Jub bar will be hosted by a different master mixologist - such as Ms Montague - so that two visits will never be the same. To avoid any unforced errors concerning lapses into drunkenness, sushi will also be available on these evenings.

So how does one walk the way of the Jub Jub? Only those who hold the key will be bidden to play with the Mad Hatter. And how does one get to hold the key? Well, you’ll have to find that one out for yourselves.

To discover the Top 10 best cocktail bars in London, follow this link. 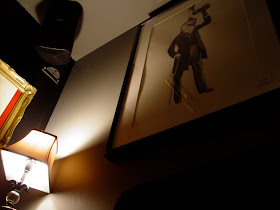