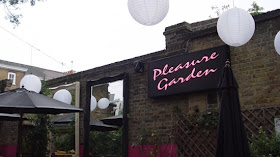 As a member of the Fluid London editorial team, it is required of me to maintain a certain level knowledge about bars, restaurants, clubs and pubs in London, which is why myself and the team are constantly on the hunt.

Wednesday - My New Favourite Beer Garden - Grand Union Wandsworth
Grand Union took hold of this property a few months back and converted what was a fairly standard pub into an Alice in Wonderland fantasy with a beer garden to rival London’s best. I went along to the launch party of this 10th Grand Union pub and was immediately intrigued by the fierceness of the interior and exterior design: neon signage stating ‘dance’ (is that an instruction?); foliage, inside and out; classic Chinese fans laid over floral wallpaper; golden frieze; the fresh smell of paint in the men’s toilets (makes a change from the usual); old framed pictures of ships coming into harbour and antiquated gents at leisure; hanging lanterns; oversized coloured cushions on outdoor raised wooden platforms; a giant hammock (enough for more than one); plus flamboyant lampshades and rugs everywhere. The outdoor bar wasn’t covered and I questioned whether late August was the right time to open such a great beer garden but apparently there’s plans to bring in more ostentation in the form of tree houses to sit at the rear, just next to the River Wandle.

I grabbed a pint of Young’s, checked out the mainly 25-35 age bracket, got down to the slightly distorted but otherwise welcome Motown-heavy playlist from the DJ (cant go wrong with a few Dianas and Michaels), before asking a local her opinion about the new Grand Union Wandsworth pub. Emma, an Australian living in Wandsworth, held her birthday celebration here a few months before the alterations took place:

“It was quite bland and boring. Improvements include the nice lamps out the back and the decoration inside so it looks like somewhere you’d actually want to come on a Saturday night instead of being an old man’s pub. Definitely an improvement on last time. Does need more toilets for the ladies though.”

Thursday - My New Favourite Cool Cafe - Scootercaffe
This one could technically be classed as a bar as well but when I was there I was drinking tea so I’m going to call it a ‘cool cafe’. Possibly even London’s coolest cafe. It has cats roaming throughout the premises, rubbing up against legs and generally giving the place a homely air. Cakes, coffees, vintage tunes and loads of antique knick knacks aid this notion further. This is a true freelancer/student/arty type hangout, especially as the wifi is free. And when the sun has got his hat, the miniscule roof garden comes out to play. Scootercaffe is now officially the worst kept secret in Waterloo.

Friday - My New Favourite Bar - Three Blind Mice
I came across this subterranean bar in Shoreditch purely by accident when I was scoping out Casita right next door. There was no signage, just a lamp with a mouse insignia on it, and some very enticing funky music booming out like a siren through the open yet diminutive doorway. I popped my head in, descended the rickety stairs, and enquired if they were open. They weren’t, but with interest suitably piqued, I returned just two days later when they were. Within a minute of stepping up to the bar my colleague and I had a cold can of Red Stripe in our hands and were engaged in conversation about the fall and rise of Hackney Wick not only with the barman, but with the owner, the DJ, and the other customer sat at the bar as well. It doesn’t come more ramshackle than this but this cosy bar has so much character I doubt any two visits would ever be the same. 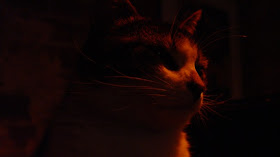