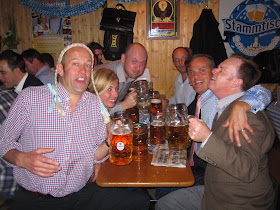 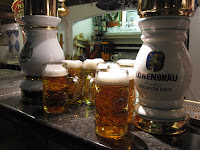 There are a few things in life that will make my grumpy Scottish boyfriend cheerier; whisky, giant beers and sausages. Fortunately, the Bavarian Beerhouse in Old Street can help out with two out of the three and that’s where we’re heading this evening, on a school night. Oh dear.

It’s the opening of Oktoberfest, which means wursts, many steins of beers, an oompah band, and the all female dirndl staff dressed in traditional Bavarian attire. The boyfriend is eager to start so we arrive a little early; descending the stairs into a basement where all the festivities will commence. There is only a scattering of people. As part of our ticket, we receive a free stein of beer, so we cash them in straight away to get down with the party vibe. 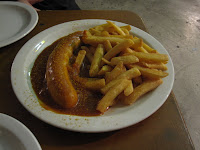 We are placed at a table with other journos, who keep themselves to themselves. The steins arrive and we glug away happily. As we are basically in The City, it’s no surprise when a twenty strong group of city boys bowl in, making a racket and causing a fuss. I look about and realise that the inhabitants of the Bavarian Beerhouse are basically all city types. Normally I try my best to avoid places where these people go - they can grate the soul - but for tonight I will join in with their environment and hope for the best. 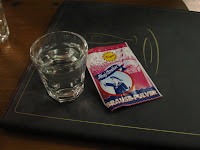 First stein down for the boyfriend and he feels it’s wise to get some food, if we want to last the night and avoid a stonking hangover in the morning. The currywurst with fries and sharing platter for two seems like the best option and are quite bargainous. He orders another stein, this time a brown one. I’m still working on my first.

What is admirable about the Bavarian Beerhouse is the flawless service. It is all table service and when you want a beer it is with you within a minute. There’s no mucking about. You see some of the girls bringing over six steins at a time, which impresses all the boys to say the least.

Engrossed in my beer, I fail to notice the two man oompah band serenading our table; one with guitar and the other with an accordion. Our table is not particularly receptive to their music, so they move on to the boys who get up and dance with them, shouting and whooping as they go. They start to bang their steins on the table to the beat of the music and everyone follows suit.

Before I know it, the boyfriend is on stein number three. I decide that I will abandon mine, as it is warm and flat, and order a girly white wine spritzer instead. It arrives in a pint glass. I can see where this night is going.

With the faint taste of apple sherbet lingering in my mouth, we get the tube back West, confident that we will return at a more suitable time. Let’s hope the hangover isn’t too savage.

Curious to find out where the best beer pubs and bars are in London? Those pubs and bars that serve an encyclopedic wealth of beers and ales and lagers and stouts? Then simply follow this link and the Top 10 shall be revealed.
Christian Rose-Day at 09:42
Share