Whisky Tastings Should Never Be A Dry Affair 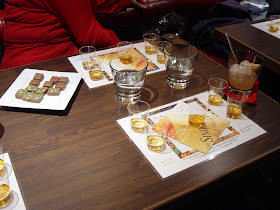 So it’s a Tuesday. I’m in South East London patrolling the Camberwell area, assessing a few contenders for London’s Coolest Bar Top 10. It’s raining; cats, dogs, wardrobes, sheds, you name it. It is also the first night of the Champion’s League football on TV but I’m due at a whisky tasting at The Lonsdale in Notting Hill. That’s west London and there’s a problem with the Hammersmith & Shitty Line. But I’m in Camberwell, and it’s raining cats, dogs, etc....

There are moments in the life of a football-loving, rain-averse, south Londoner when questions intrinsically pop into one’s damp-leaking mind like “is this possibly the worst umbrella in the world’s?”, “are jeans the most porous of all clothes?”, and sometimes simply “whhhhhhhyyyyy?”; followed swiftly by “this better be bloody worth it!”

And you know what? It was. 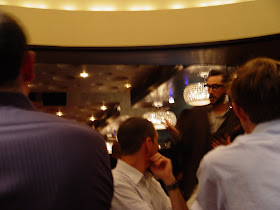 I am alone. I wasn’t able to secure a +1, probably due to the reasons mentioned above. Once inside The Lonsdale, and after a cursory effort to dry myself under the hand dryer in the men’s toilet - “no fella, I haven’t peed on myself, the rain did this to me” - I am stood in the centre of The Lonsdale’s snazzy bar looking like the lemon that is in the....oooh, hang on, that tastes good. What is that? A whiskey sour, just handed to me as I arrive. I like. Wet who? Champions what? Camber, welllll.

A young, bespectacled whisky expert from drinks giant, Diageo, is in attendance, looking very dapper. He has a healthy obsession with Brylcreem and is sporting a waistcoat and jacket combo; obviously a connoisseur and a gentleman at heart. He looks like he knows a thing or two about blends and single malts.

A chap stood next to me is conversing with a waitress, who is trying to offer him a menu. “Oh no thank you. I know what I want already. I’ve been here before and you have a very nice chicken caesar salad.” He’s confident. 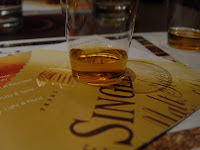 We’re lead, albeit squelchy, from the mirrorred bar into the glam rear restaurant which has an impressive shard light fitting that somehow reminds me of Superman’s icy hide out at the Fortress of Solitude.

Having learnt a lot and not drunk a drop yet I’m anxious to get started. 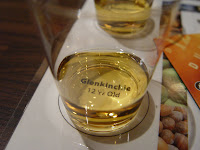 We pinch our noses and take a sip of Glenkinchie 12 year from the Lowlands. This action helps to prolong what the teacher coins the ‘factory of hallucinations’, the mind’s trick of associating smell and fumes with some forgotten memories of Mum’s apple pie, fresh cut grass in the school playground, or burning tires at the race track.

The Glenkinchie is thin, inoffensive and slightly citrus on the end. The first sip warms my cockles. The second warms my ears. By the time I’ve tucked into the third, my toes are nice and toasty, even though no one knows I’ve sneakily removed my wet shoes under the table. The opulence of The Lonsdale really seals the deal for me; a smart, bright, sparkly interior puts a man to thinking he might stay a while. And indeed I did just that. 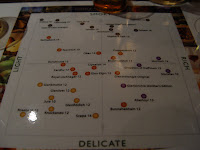 We make our way through a whisky taste map which has smoky, rich, delicate and light as its N, E, S and W.

The second tipple is created at the distillery that is Scotland’s highest, and the UK’s wettest place, apparently: the Dalwhinnie 15 year. I’m getting the hang of tasting using the entire tongue, not rushing to get the golden hued liquid to the back of my throat. This is my favourite of the evening. It’s spicier and aided by the consumption of several Rococo chocolates at the table.

The third is the Singleton of Dufftown 12 year from Speyside, which is richer, and almost tastes of toffee. Our journey then takes us onto the Isle of Skye, for the Talisker 10 year, which is attached to the best story of the evening - one in which the teacher confesses to digging up peat when half cut on Talisker - and is naturally smokier than the rest due to said peat. It’s also apparently rather tidy when drizzled over smoked salmon; yeh. 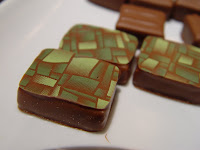 The final mystery whiskey, which has been staring at us all evening from the centre of our map, turns out to be a blend: the new Johnny Walker Double Black. It’s not to my liking though.

Lesson over, rains cease. I leave The Lonsdale with a happier face than when I entered, plus a clearer comprehension of the world of whisky AND Notting Hill’s swanky little hidden gem. I text a friend who has been watching the football, and attempt to type the word ‘fancied’ into my phone. The predictive text offers me ‘damaged’ instead. How appropriately inappropriate. Manchester United complete a nil-nil score bore in the Champions League. It’s then I decide it’s good to get wet sometimes.
Christian Rose-Day at 17:13
Share