A Cat Amongst The Flemings (New Cocktail Bar) 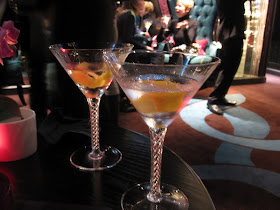 When the boyfriend and I rocked up at the boutique Hotel Flemings, in Mayfair, for the launch of their new drinking and dining options, a doorman in a top hat and tails greeted us. That should’ve been our first indication that we were hopelessly underdressed. With names confirmed on the list, another well-dressed lady guided us down the marble stairs into a small room at the back of its restaurant, known as Flemings Cocktail Bar.

We were welcomed by the manager, who urged us to try the Mayfair Martini. Not to appear rude, I grasped the large glass of clear beautiful liquid and looked at it nervously. I mentioned that I don’t really know much about martinis, as they’re usually a bit too strong for me. Cautiously, I took a sip anyway. The boyfriend, however, took one big gulp. He’s Scottish, he’s used to hardened spirits. Thinking that my throat was going to be seared and that I wouldn’t be able to speak, I was surprised to find it was actually rather smooth.

We were then informed that Flemings Cocktail Bar uses a special gin called Berry Bros & Rudd No. 3, as it only has three fruits and three botanicals, which makes for a cleaner finish to the martini. It’s only been around for the past few months and they wanted to try it out in the new bar. I was certainly impressed, so much so that I magically finished my martini, no searing.

Canapés eyed up and captured, I popped a smoked salmon, caviar and foie gras with marmalade morsel into my mouth. I then leant back on the aqua banquettes and scoped the clientele. 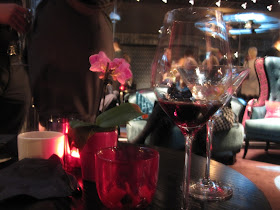 All the ladies were donned in their finest designer dresses and highest stilettos, whilst the chaps were in slick suits. I looked down at my tatty Nike trainers and oversized tiger tee with apprehension. This doesn’t normally bother me as there are usually at least a few people in jeans. But I stood alone that night, with the boyfriend that is, slightly ashamed of my dress-down look. To ease my insecurities, I saw, seized and consumed a Violet Moon champagne cocktail which tasted like a summer fruit pudding with alcoholic benefits. Exactly what I needed.

After that, our next tipple was the Sipsmith’s gin martini, with an olive in it. Sipsmith’s is a new gin from Hammersmith with a mighty kick. The champagne (sparkling wine) was Ridgeview. I knew I‘d heard that name from somewhere, so immediately got my iPhone out. My notes told me it was crowned the best sparkling wine in the world in 2010. Flemings, it would seem, really knows their stuff. Ridgeview is as good as branded champagnes. In fact, scratch that, it’s better. A crisp taste with not too many bubbles makes for a happy Cat.

Chatting with the boyfriend, I mentioned how a clash of brown and piecing blue carpet would ordinarily not work, but in the dimmed lit safety of Flemings, it was somehow acceptable. That could’ve been the alcohol talking though.

I needed to fill up on rare beef and celeriac nibbles, fish fritters with aioli, and delightful posh cheese puffs, as the martinis had gone straight to my head and I felt quite giddy. Finishing on a miniature treacle tart, the boyfriend guided me out of the bar and home. My overriding feeling: who cares about fashion when you have top-notch cocktails to sip on. Definitely not this Cat anymore. 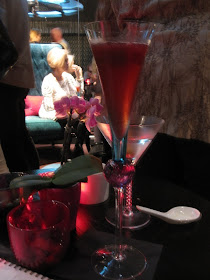