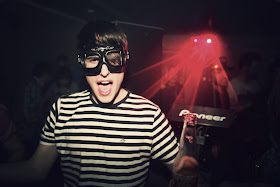 I couldn't work out why everyone in the bar kept looking at me. Was it my grey knit hoodie that I hadn't quite yet remembered to take off? My unbrushed, and therefore unstyled, hair? I realise that these two together are the essence of 'don't care' chic. However, to perfect this look, it's best to actually invest a lot of time, effort and makeup into it. So maybe it was my friend? His haircut was quite special in a Shaggy from Scooby Doo way.

Whatever the reason, it was a great ego boost - at least for the first fifteen minutes. A quick glance behind me and I realised that the neon sign spelling out 'sex' probably had more to do with it. I was at the press launch of The Nest bar and club in Dalston. Opening up at the former site of Bardens Boudoir, visitors are promised more of the same from Bardens: an independent venue happy to play host to acts and DJs that play music it rates regardless of what the rest of the world thinks. According to its website, it’s weekly Saturday night, also known as ‘The Nest’ aims to play new music but be ‘fun’ at the same time. 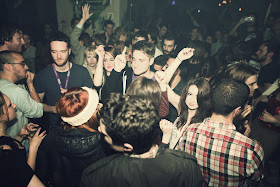 Unfortunately for Bardens, its scruffy laissez faire attitude wasn't enough with new Dalston bars and clubs popping up in the 'too cool to care' category and booting Bardens out in the process. While Bardens may have been a bit more organic, The Nest’s refit has been lovingly attended by designers and creatives keen to create an edgy, industrial feel, which, if a little overworked, does the job.

Cement floors, exposed guttering on the walls and, as already mentioned, neon signs, give off the desired effect. Although, The Nest isn't a huge venue, so it doesn't quite manage to carry off a large–scale warehouse or construction site persona. The alcoves, with more private seating and lit up by red tea lights along one side, look cute and the raised ceilings mean its roomier than Bardens.

The DJ played a suitably cool mix of music, which I liked enough as background music but it wasn't going to get me up and dancing. A few people braved the dancefloor, cardigans and rolled up jeans–a–go–go but as it was a press night the atmosphere was chattier than anything else. Our celeb spots were Annie Mac – or at least I think it was her – who was bouncing about chatting to people and the guy who played Spider in Coronation Street - definitely there. Aside from that, the DJ looked like Nick Grimshaw, but I’m pretty sure it wasn't him and, to be honest, a haircut like that is twoapenny Dalston way. 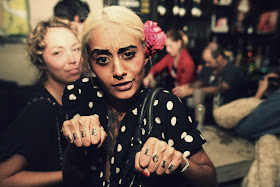 Time will tell if The Nest, on Stoke Newington Road, goes the way of so many new East London bar/clubs: so wrapped up in its trendiness and attracting the cardigans that it forgets about putting on a good night. Or it might stick to its Bardens roots. There are encouraging signs at least: The Nest wants to be a hub for musicians and locals, promoting local bands and DJs as well as overseas acts. Its Nest Egg Scheme will give a monthly cash award to a suitably deserving act and offer mentoring with an established professional in their field. With 20% of all bar profits going towards this, the bar is serious about…erm….being musically serious. Despite having to work double time to make sure they get paid after that darned nest egg project claims the lion’s share of their spoils, the barmen are a friendly crowd and thankfully forego any snooty east London pretensions.

To discover the best night clubs in London, follow this link to the Fluid London Top 10.
Christian Rose-Day at 11:08
Share