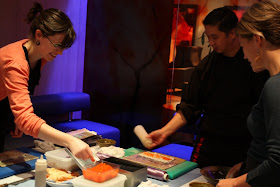 Making sushi is a lot like sex. By that I mean that, as long as you have access to the requisite equipment, anyone can have a fairly successful bash at it. Doing it well - the sushi, that is - takes a fair bit of practice and a certain degree of manual dexterity, as I learned when I attended Pan Asian restaurant Chino Latino this weekend.

I attended a sushi making masterclass at Chino Latino which started with a demonstration from the head chef, Lorenzo Bautista who has worked in some of London and Dubai’s most famous Japanese restaurants. Such nimble fingers as he rolled the nori sheets, such masterful swipes of the oh-so-sharp blade. Such exquisite results. 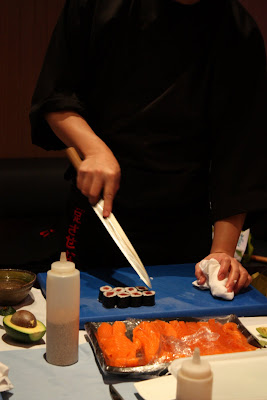 Then it was my turn. I made a traditional tuna roll, a salmon and avocado California roll, and a crispy prawn tempura roll. Or, at least, I tried to. Let me say in my defense that they call it sticky rice for a reason. It stuck everywhere but where I wanted it to. Then there was the wasabi, which I was a bit heavy handed with to say the least. 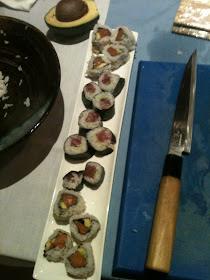 My efforts (above), as you can see, were a bit wonky, compared to Lorenzo’s perfect specimens (below). A fumble up an alleyway after kicking out time, to his Egyptian cotton sheets, if you will. Still, it was a really fun couple of hours so who cares about looks. With your eyes closed, it all tastes the same when you pop it in your mouth, doesn’t it? The sushi, that is. 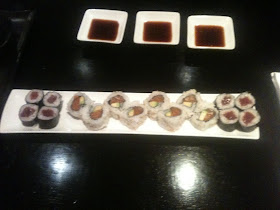