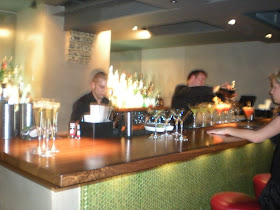 With its basement location, it would be all too easy to let Bar 92 go unnoticed, but having attended the launch night, it looks to be one place that is certainly worth making the effort to find. Guided by tea lights and a helpful bouncer, we began the night by descending the stairs to this underground hideaway, having no idea what to expect.

Whilst you might easily mistake the red neon ‘Bar’ sign on the stairwell as an indication of leather bar stools and American rock music, you couldn’t be more wrong. Firstly, Bar 92 is dark, and it took a moment for us to register our surroundings and choose a seat. In our confusion, we opted for small table seats, which looked like they should’ve sat more than two people, but were so close together that we clashed knees repeatedly, trying to clamber in. 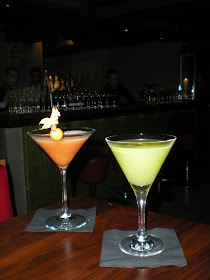 Bar 92 is remarkably comfortable though. It’s small enough to seem intimate and romantic, but big enough to feel lively and accommodate fairly large groups of guests. The singular bar, on the other hand, is small and despite being sat close by, we were glad of the waitress service. There were a range of complimentary drinks provided, including two delicious cocktails. The ‘Eternal’ comprised of gin with peach and kiwi juice, and was a favourite with my plus one. However, the bar’s signature – the ‘Ninety-Two’ – was equally as yummy, merging vodka and apple liqueur with white grapes and lychee juice. 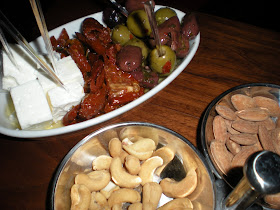 There were also flutes of Prosecco on offer, which only served to add to the city-style sophistication of the bar. It might be situated just ten minutes from the shopping haven of Oxford Street, but the opening night certainly isn’t short of the number of suits and pencil skirts needed to constitute an officially classy clientele.

One thing this bar excels in is getting the balance right. Olives, feta and sundried tomatoes are available in perfect snack-sized portions, and were listed on the menu at perfectly sensible prices. The music is audible, but not loud enough to be a conversation killer. Bar 92 might not be the sort of bar you’d spend more than a couple of hours, but in an area that already excels in restaurants and cafes, this is a great secluded spot to enjoy a tipple or two after work or before a big night out.

Read more about new bars, restaurants, pubs, and club in London, check out the Fluid London Top 10 of new venues. 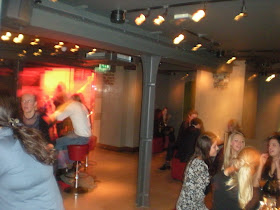