The Scantily Clad Woman Was Dripping In Snakes! 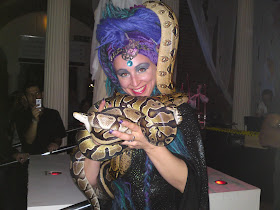 You know you’ve had a good night out when you wake up in the morning, mouth dry and head reassuringly fuzzy, and the flashbacks that slowly thud (painfully) into place in your wine-soaked brain are really great ones (and not horrifically embarrassing or awful and didn’t include crying about [insert name here] in the girls loos) – thankfully, Halloween at Vinopolis was one of those enjoyable nights.

The event was called ‘Laugh Until You Cry, Dance Until You Die’ at Vinopolis, London’s best wine-tasting venue. The night was the 29th October, Halloween themed, and my costume was rubbish – a half bat, half devil hybrid (which was actually just some sparkly red horns and a pathetic looking pair of bat-wings that I found in the bottom of my wardrobe that morning). I’ve never been one to go all out at Halloween – but luckily enough, the guys at Vinopolis were on-hand to assist in making us look as ghoulish as we wished with face paints galore. I opted for a spiders web, complete with green glitter (a pretty safe bet, I must admit). 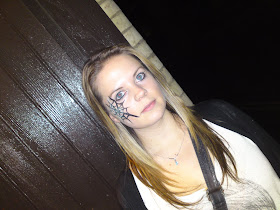 After losing my beloved devil horns on the dance floor to music that was more funky than spooky, the lights dimmed and a dancer took to the stage. I knew it was going to be something special when I realized I was in contact with a scantily clad woman wearing nothing more than a bikini, and all I could focus on was what was around her neck. The lady was dripping in snakes! Great big fat scary looking snakes were draped over her face in a sort of living, breathing Hermes scarf. But (as my flashback comfortingly suggested to me the next morning) I handled the snake situation with aplomb, even giving them a stroke when she came around the audience (all the time silently screaming in my head “GET THEM AWAY FROM ME”). Claire: 1, Snakes: 0. A silent victory was had by me and I couldn’t help crowing to my friends the morning after about just how brave I’d been.

The whole evening went past in a giddy rush. We tasted wine from around the world in a spooky wine tour, watched half a séance with none other than Ian Shillito (as seen on ‘Most Haunted’ – if you don’t know, you better get to know! - and feasted on scary sausages and mash from the food hall. Ok, the sausages were the least scary part of the night. But they were also the yummiest.

No expense was spared. For those that wished, there was the option to go to a comedy show during the evening (hence the ‘Laugh Until You Cry’ part of the event) but we chose to ‘Dance Until You Die’, or, in our case, until you realize you’ll miss the last train if you don’t leave immediately.

It was a Halloween night that was ghoulishly scary, creepy and spooky in equal amounts, as all good Halloween nights should be. And when I woke in the morning I was left with no nasty flashbacks.
Christian Rose-Day at 16:33
Share