The Tasting Event for Hypocritical Carnivores 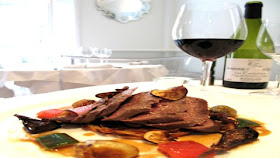 I'm a hypocritical carnivore: I love meat, but ask me to eat a fish dish that can stare back at me and I'll pass. I'm likewise squeamish about eating meat that, in my opinion, rather crassly refers to the exact body part that you are about to eat: chicken hearts or feet? No thanks. Call it a fillet or steak and I'm much happier to chow down on the dead ani-mal parts, safe in the lack of conscious knowledge of what I'm eating.

That's why I can easily go to MacDonalds, or eat 'meat' noodles from my local Chinese without shuddering. However, I draw the line at foie gras. Much like diners with a sensi-tive soul who claim they can't eat veal 'because it's baby cow' but carry on eating baby sheep, AKA lamb (you see what I mean about the disassociation with different food names), the thought of enjoying foie gras is just too much. That French pate is made by force-feeding ducks until they are so full they are stuffed - in both the eaten-too-much and mortality sense - is inhumane and it doesn't matter how superior foie gras is to a bogstandard pate, I'm not having any of it. Like I said, I'm extremely hypocritical.

What then of ethically produced foie gras? A marketer's dream, no doubt, but is it simply marketing spin? French company La Maison Barthouil claims to produce foie gras from ducks that are allowed to live for longer, roam free on grassy pastures and aren't force-fed; duck heaven, for fourteen weeks. And so it was that I ate delicious foie gras guilt free. Merci beaucoup Maison Barthouil for showcasing your delights at French restaurant La Trouvaille, just off Carnaby Street in Soho (along with other French food producers from the basque region). Having showcased their wares at the Speciality and Fine Food Fair in London at the start of September, the producers were keen to demonstrate to food journos and industry peeps that there is more to French cuisine than stereotypical patisserie from Paris and hearty sausage cassoulet from Toulouse. 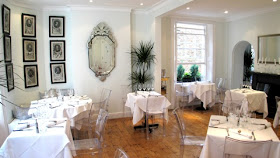 They were joined at La Trouvaille by other French food specialists from the Basque region. Confectioners Maison Pariès’ almond–like slices were delicious while the chocolates were incredibly rich; the Pays Basque Dairy Cooperative served its nutty flavoured cheese with cherry jam (not my bag); and family-run distiller and winegrower BRANA, whose pear flavoured distilled spirit was so strong, I felt like I'd just been run-ning for a bus in the cold, such was the glow on my cheeks, but it's cocoa-flavoured nectar was warm and luscious tasting.

If these Basque food producers wanted to prove they've got food us Brits would be happy buying, I happily concur. I drank rose wine because it was good rather than be-cause it was cheap, ate caviar and ethically reared smoked salmon as guilt-free as the foie gras, and admired macaroons so pretty it hurt to eat them.

Vive la revolution - the Basque food revolution that is.
Christian Rose-Day at 07:52
Share