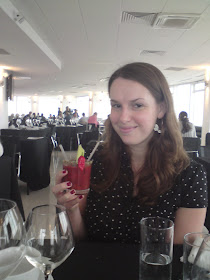 My right eye has just started twitching and I really want to give it a little scratch. A few inches away from my eye, I suddenly remember and jerk my hand away. ‘Phew that was close,’ I mutter to my friend.

Minutes before my eye started misbehaving, begging my hand for a gentle stroke, I had foolishly picked up the ‘accessory’ that was innocently wedged on to the top of my glass. My friend and I had looked at it and remarked on its plumpness, and how intriguing it was that it came from Dorset.

Say hello to the Dorset Naga, the world’s hottest chilli pepper. Being the curious sort, I had plucked the chilli from the top of what is allegedly the UK’s hottest Bloody Mary and inspected it. The last time I’d handled a chilli (and it was just a standard average-hot one from Sainsburys) I had given my eye a tiny little rub and ended up with sore eyes for two days and two pairs of contact lenses ruined.

So, no, Dorset Naga. You won’t win this time. I know you have tainted my paws with microscopic specks of flaming hotness. You will not now find your way into my eyes.

I am locked in this mini battle of refusing to make the same mistake twice and keeping both hands down by my side at Altitude 360, on the 29th floor of the Millbank Tower overlooking the River Thames. The fiery concoction will be served here until 19 December as part of their Sunday brunch.

But this Bloody Mary is apparently so hot they can’t offer it to their normal customers. Two hours earlier, when my friend and I enter the Altitude 360 restaurant, we are given the choice of a non-spicy Bloody Mary or a Bellini. There is no sign of the red-hot drink on the menu, which is odd. I beckon a waitress over and ask for the signature drink, you know, the one you’re promoting, and have sent out press releases about. She’s confused but eventually returns with a spicier version. I pour myself a large glass of water, brace myself (for this is the UK’s hottest Bloody Mary on top of a monstrous hangover from too much Halloween partying), and take the teeniest weeniest sip. Huh, not that spicy. I take another sip. I read the press release again – ‘the Dorset Naga is almost twice as hot as the previous record-holder’. It tastes like the waitress has just poured more Tabasco in. My friend and I are confused. We shrug our shoulders for now and conclude that maybe they’ve run out of Dorset Nagas.

We turn our attention to the view from Altitude 360. First, our immediate surroundings. The restaurant is futuristic, all white walls, white ceiling, white floor. Funky bar stools in chrome and white, black leather seats, and purple and white orchids make it a trendy space. There’s a quiet laidback vibe, a white cocoon high above the capital. 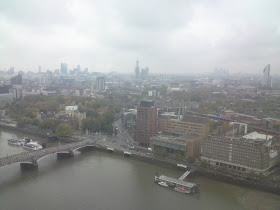 And as Altitude 360’s name suggests, there are 360 degree views across London. As we puzzle over our Bloody Marys, we do a lap of the restaurant and spot landmarks like Big Ben, Battersea Power Station and The Shard. It’s a drizzly day and the mist and grey skies mean we can’t see as far as Windsor Castle, which the waiter assures us you can see on a clear day. In fact, today we even struggle to make out the pyramid top of Canary Wharf.

The brunch has a wide-ranging menu – pasta, omelettes, crepes, waffles, carvery, to name but a few options. Some of it is served at your table; other bits are at the various ‘stations’ where the chef makes it in front of you. The food is to a high standard (my poached egg and ham on a muffin is a particular delight: well cooked and well seasoned) but there are little errors. The roast potatoes are cold, there are no Yorkshires or stuffing to go with the roast, and the crepe fillings are meagre. There are other mistakes that are easily remedied: the windows are dirty (every customer must take their photos through grubby glass) and the staff are far from attentive. No one gives us a menu and we are puzzled as to what food and drink we can order.

And what of the UK’s hottest Bloody Mary? After more explaining to the staff, it finally appears. To say it is hot is an understatement. It leaves the left-hand side of my mouth burning and basically paralysed for the best part of half an hour afterwards. Even the gums round my teeth are fizzing and aching from the fire. I spend the journey home on the tube sitting on my hands repeating to myself: ‘Do not touch eyes. Do not raise hand. Do not even scratch anywhere on my skin. Do not touch eyes. Do not raise hand...’
Christian Rose-Day at 08:46
Share