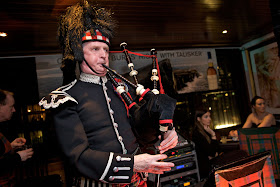 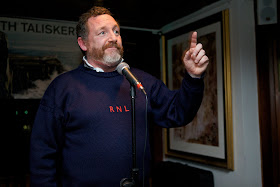 It was Burns Night in London - the night usually devoted to the birthday of Scottish poet Robert Burns - and we were at The River Lounge in St Katherine’s Dock. The event was being held for three reasons:

1) to celebrate Burns Night in proper Scottish style;
2) to raise money for a worthy cause (in this case the RNLI);
3) to get people talking about Talisker Single Malt whisky. 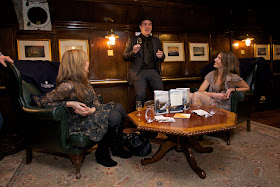 The only trouble was, neither my guest and I could find a cash machine on the way to The River Lounge. We arrived at the event with a combined total of £4.83 in our pockets. Hardly enough to save hundreds of lives.
Address To A Haggis - Robert Burns

Various luxury gifts were being auctioned off and we thought about putting in a cheeky £4.83 bid for the England Vs Scotland rugby tickets. Those tickets eventual went for £305. Hmmm. The highest auction bid of the night was £805, for a Scottish castle!! The total amount raised for the RNLI from the event was a commendable £2924 (it could’ve been £2928.83 had there been a few collection receptacles available).

Oddly enough, we found a cash machine only when we were leaving. It’s right near the Starbucks, in case you’re wondering.

So, yeh, we felt bad. We enjoyed so much and yet gave so little. We have since rectified that situation and gone to the RNLI website to donate. I encourage you to do the same. Those guys really do some amazing stuff.

Whilst at the event, we were quietly enamoured by the dramatic setting of The River Lounge. Who knew all this was here (aside from the staff at The River Lounge, obviously)? This would make a great venue for an event, clearly, and I shall definitely be going back to St Katherine's Dock to take a closer look. I urge you to do the same. The balconies overlooking St Katherine's Dock give a beautiful vantage point from which to observe the super yachts.

One last comment: no matter how bad I felt for not being able to donate on the night, I certainly feel glad I’m not the kind of person who believes it’s good form to talk loudly at the bar during performances of the ‘Address to a Haggis’, through entertaining (and under-appreciated) comedy, and, most remarkably, through interesting story renditions from RNLI volunteers and national heroes like Pete Goss MBE. I only hope people that like have enough chatter in their lungs when they need to shout for help if they find themselves drowning out at sea some day. Rude idiots should not be allowed into free events.
Christian Rose-Day at 18:13
Share