Head Chef, I Know Where You Live 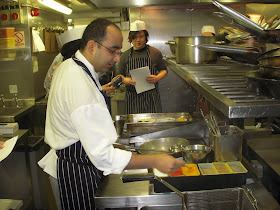 This is a plea to Anirudh Arora. I know you are currently head chef of fancy west end Indian restaurant Moti Mahal, and that you serve guests exquisite dishes courtesy of your authentic, state-of-the-art tandoor oven with a spangly cocktail bar to boot, but I was wondering if, as a Harrow resident, you may consider instead becoming the head chef of a more local establishment?

The reasons for this suggestion are as follows:
1) You would cut your commute down to nearly nothing
2) I live in nearby Pinner
3) I'll write you a really, really good review

OK fantasy over, somehow I don't think Arora is about to switch Covent Garden for north west suburbia - at least not for his work, so I'll quit with the begging and explain why I like Moti Mahal so much - and why I know where the chef lives without sounding like some sort of culinary starstruck stalker who waits behind the bins.

The West End Indian restaurant was holding a two and a half hour masterclass in making canapes and cocktails with a sub-continent twist. Head Chef Arora would take us through four canape recipes and bar manager and mixologist Simon La Moon (I get the feeling the 'La' is a recent addition) would then show us how to make a couple of cocktails. 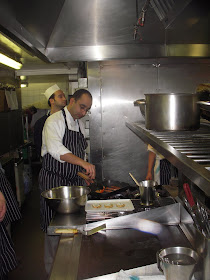 It was exciting to be in a working kitchen and Moti Mahal’s was surprisingly compact. Diners can see into the tandoor section, with its impressive selection of kebab skewers and two tandoor ovens. Its gas oven cooks the breads while the charcoal oven gives the meat at Moti Mahal its unmistakeable smokey flavour. Behind the flashy show kitchen is the main working kitchen, with less frills but this is where, in the words of numerous vacuous MTV celebs, the magic happens. 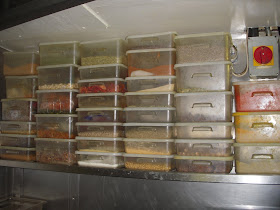 A wall is stacked with huge tupperware boxes, a pick and mix fit for a spice fiend and the rest of the kitchen staff are busying themselves preparing for lunch and dinner later. Arora meanwhile takes us through four canape recipes. If I'd thought about the effort that went in to making 50p-sized pieces of food I'd definitely eat them a lot more slowly. Take the Murgh Malai: chicken tikka mousse served on edible spoons with a quarter of a picked quail egg garnish. Before you can put the dish together, you've got to make chicken tikka to then make the mousse. Or stuffed baby aubergines, the middles cut out with tiny pastry cutters for an ultra neat finish, then topped with roasted tomato chutney. 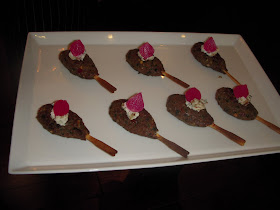 When it came to eating them, though, the mini venison kebabs with fig raita were my favourite, followed by naan bread bites topped with spiced cream cheese spread and finely sliced salmon, marinated in a honey chilli drizzle. 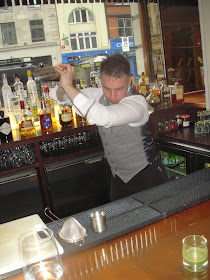 The cocktails were equally beautifully presented by barman Simon La Moon. Finishing touches like a pineapple ring balanced round the rim of a short glass or curled lime rind around a straw show the care and pride he took in presentation. But they tasted pretty damn good too. My favourite was the gin shikanjvi cocktail. Inspired by Moti Mahal’s palate, La Moon adds cumin and black pepper for a kick as well as the Shikanjvi pre mix, which contained an array of ingredients including cardamon, curry leaves and sugar. It was delicious even without the gin and lemonade top up but put together and I'd say it rivals cocktail-about-town: the mojito.

So now to go alongside my Coca Cola gymnastic badges, ballet certificates and St John's Ambulance First Aid certificate (which admittedly I had to retake once I'd sussed out the whole resuscitation thing,) I have a certificate of completion from Moti Mahal for its Indian canape and cocktail class. But I'd give up all of these sterling achievements if Mr Arora decided to go loco and start Moti Mahal Number 2: Harrow.
Christian Rose-Day at 12:41
Share