As I walked through the doors of the Chinese Cricket Club I was met by a busy atmosphere. This was most unexpected. Not only is this Chinese restaurant a hotel restaurant (part of Crowne Plaza - The City), and hotel restaurants often equal a rather dull ambiance, but I showed up after lunchtime, which usually marks an afternoon lull. However, I soon understood the reason to the bustling activity: fiery Sichuan spices don’t exactly slow you down. 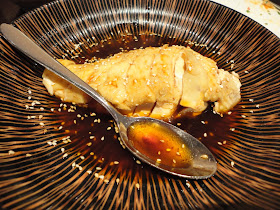 I was invited to participate in the Chinese Cricket Club’s Chinese masterclass and banquet, which takes place every last Friday of the month. Executive Chef Brendan Speed, who’s formerly worked for Zuma in Istanbul, leads this 90-minute epicurean journey into Chinese culture and cuisine. 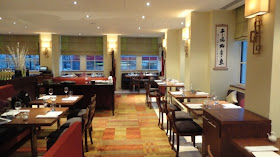 Labelling the event as a “banquet” might sound a tad medieval but I can assure that this is a perfect description; it’s nothing but epic. I was happy I’d only eaten a miniscule lunch, it would’ve been impossible to stomach the 9 courses otherwise. 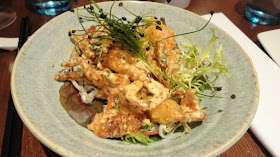 There were 10 of us, ready and eager to be drawn into the Asian world and the Sichuan kitchen. We were seated like an audience in front of an imaginary stage, where Brendan was ready to kick off the show. From the very start it was clear that Brendan is passionate about his job, and also exceptionally proud of the menu he’s put together for the Chinese Cricket Club. The menu is Sichuan-heavy, but has also influences from Korea and Japan. It was designed to offer something different yet authentic to the Chinese restaurant scene here in London, where often bland Cantonese dining dominates. 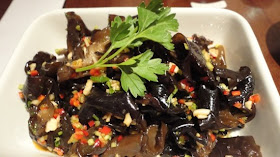 The masterclass weaves tastings with theory, which makes it easier to grasp the concepts of Chinese cooking. Dishes such as tea smoked duck, soft shell crab salad, and hot and numbing chicken were brought out while Brendan spoke about their ingredients and history. The cloudy mushroom salad, Madagascan jumbo prawns and the restaurant’s signature dish Kung Po chicken, prompted discussions about authenticity and cooking techniques. The Chinese Cricket Club has a lot of Chinese guests, which shows that the restaurant is successful in creating authentic flavours. 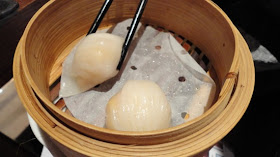 My favourite part of the masterclass was when the dim sum master came out. A charming man, whose English vocabulary seemed to consist of the words “yes” and “good”, he showed us that making dim sum is a true art. The way of judging the quality of this traditional breakfast dish is to count the folds; the more folds the better. I have to admit I gave it a go, and fully realised how difficult it is to produce dim sum to perfection. Sadly, I can’t endorse my skills but I can recommend the special Black Cod dim sum, which had a crispy base, sticky top and a fantastic mild flavour. 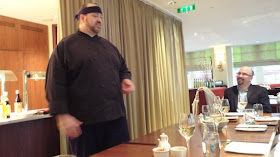 After indulging in 8 dishes, there was only dessert left. A smooth coconut custard with mango and passionfruit coulis came out, and I dismissed my stomach’s plea that I was already filled to the brim. Of course it went down a treat.

The Chinese Cricket Club is a great dining experience and the masterclass is a first-class introduction to Chinese cuisine. The décor might not be the most riveting - it’s decorated with an inoffensive and calm design, with light green being the dominant colour - but it does form a relaxed environment and there’s a tendency to forget the cars whizzing past on New Bridge Street. And, of course, with the hot food that the Sichuan kitchen is so famous for, one needs a bit of zen to control the invigorating feeling the addictive chilli produces.
Christian Rose-Day at 04:52
Share