How Street Is Street Food? 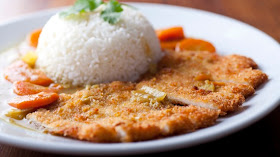 London is one of the fastest cities in the world. Whether it’s lattes or broadband we’ve become accustomed to getting our hands on what we need in a flash. As a resident of our capital you become less and less accepting of waiting, drumming your fingers and tutting when someone faffs and fumbles at a cash machine.

Yet despite the advance of speed in a globalised era, perhaps the last bastion of British upper lip stiffness was our grub. Yes we saw the emergence of sandwiches grabbed on-the-go and there were manifold restaurants covering the four corners of the earth, but we held on gamely to the notion of sitting down with a knife and fork; from tucking in to a full English breakfast to silver service at an up-market Argentinean steakhouse. ‘Fast food’ came with the well-known negative connotations.

Encouraging news: these days there is no need to equate a traditional dining set-up with good food. The foodie cobwebs have been swept away and great nosh is available in a flash.

Fluid Londonistas will have noticed that there is an innovative force at work on the front line of this transformation. Its name is street food and its modus operandi is fresh, healthy ingredients at accessible prices available on (yep, you guessed it) the street, meaning lots of people get the opportunity to dig in.

Other countries have been good at it for ages: Pho (Vietnam) and Wahaca (Mexico) are just two entrepreneurial examples of bright sparks bringing this style of dining to London.

The enthusiasm for eating the ‘street’ way shows no sign of abating. Surveying the Fluid London inbox recently, it is easy to see the spirit of street food is everywhere: East Street does it for the entire East Asia front near Tottenham Court Road; Gyoza Otaku is a Japanese Gyoza pop-up at The White Horse in Hoxton; and Malaysia has also put in a strong showing thanks to modern Malaysian fusion at Jom Makan in the new Westfield Stratford Mall and the special pop-up street food menu at Suka at the Sanderson in the West End.

And while it may be so that Londoners have become more impatient in the twenty-first century, street food is about dining in informal and convivial seating arrangements (or doing the same in the office if you take away); a state of affairs which does more than enough to offset our grumpiness as we enjoy getting our fingers mucky together.

And I bring glad tidings: attending a preview at a new joint called KIN (pictured below) I can announce that the revolution has spread to Clerkenwell. This funky establishment, with a full glass frontage and plenty of attractive exposed brickwork, takes you on a foodie journey around Asia. The offerings here are going to really get your taste buds zinging. I loved the nuttiness of the peanut sauce on the juicy chicken satay and am already clearing space in my diary to go back for a fistful of the delicious hoisin duck spring rolls. I’m told they are a family recipe and that shines through in the flavour. The waiting staff were sensible enough to leave each table a pile of napkins to help us mop our way through the saucy extravaganza of flavours. 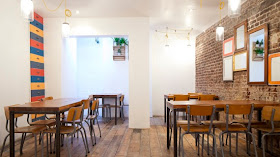 So is it time to call street food ‘street’? Unhappily, the adjective has yet to make waves in the world of dictionaries (actually, probably the real last bastion of British upper lip stiffness). Picking up a representative reference title all I could find looking up ‘street’ was “a public road in a city...typically with houses and buildings on one or both sides” – not much fashionable about that.

And then it clicked: ‘street’ is of course an abbreviation of ‘affording street credibility’ and the latter is defined as “acceptability among fashionable young urban people”. It was all coming together! Clerkenwell is crammed with fashionable young urban people and KIN has already begun to attract their attention thanks to treats including chicken katsu curry, pad thai and green curry, with vegetarian dishes such as soba noodles with vegetable tempura soon to follow.

So there you have it: street food most certainly is ‘street’ and its future in our metropolis looks very rosy. There’s an idea to spread among your KIN...
Christian Rose-Day at 19:37
Share