Top Of The Pop-Ups: Bars That Keep Popping Up In London 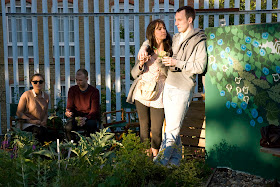 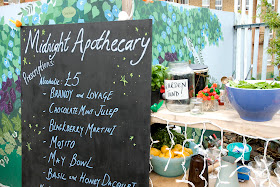 In the rather leafy, residential part of Rotherhithe, round the corner from the station, I’ve discovered what I’ve always thought of as my personal heaven: an English country garden full of lavender, with exotic looking birds on gently swaying trees, and a bar with cocktails on constant flow. 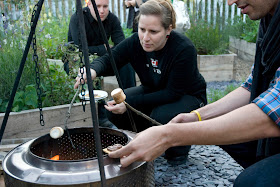 I’ve just come through the garden gate and up the patio steps to the Midnight Apothecary, Brunel Museum’s rooftop pop-up bar. Run by the lovely Lottie, the bar is open every Saturday from 5pm to late (as late as the local residents will allow themselves to revel in the sounds of summer cheers). The aroma of lavender lingers in the air and is intensified by the floral infused cocktails. The atmosphere is chilled, the sound of busy London is replaced with laughter, and the August setting sun still emits enough warmth to keep the evening chill away.

What’s so special about the Midnight Apothecary pop-up is that it’s set in a museum which, in itself, is a bit out of the ordinary, but it’s also accompanied (for an extra fiver) by a Grand Entrance Hall tour. This is no standard tour around a museum dedicated to the Thames Tunnel – the world’s first tunnel under a river built by Marc Brunel and his son, Isambard Kingdom - no, no. This tour involves going down a shaft (through a tiny door) and down a maze of scaffolding to reach an underground room that was the former entrance to the tunnel. Robert, the tour leader, provides an animated and passionate history of the tunnel, beginning with a, “welcome to the 8th wonder of the world!” 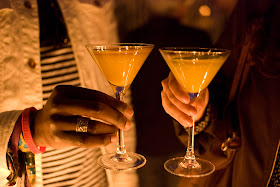 Currently, the room is being used as a lecture room for the museum tour. In time it’ll host concerts and talks. The acoustics will be pitched perfect. Just like the alcoholic potions inspired by the latest summer petals.

The Midnight Apothecary (pictured right and above, courtesy of Eleanor Salter Thorn) is a feast for the senses and it’s one that everyone should experience before the summer is out (the end of September to be precise). Summer has arrived but let’s face it, it’s not a season that sticks around.

Now you have a taste for pop-up bars, here’s my Top of the Pop Ups Top 5 Summer Bars in London (cue Led Zeppelin’s “Whole Lotta Love”)

Ales and Tails, Twickenham
Ales and Tales is a pop up craft beer and cocktail house open from early August. It’s the half sister of the famous Citizen Smith Putney, so expect quirky girls in pretty frocks and handsome men in collared shirts and classic jeans.
Ales and Tails, 29-31 York Street, Twickenham, TW1 3JZ

The Dead Dolls Club, Helmsley Place
The dolls from The Dead Doll’s Club (below) are having an affair to remember with the London Fields Brewery; a summer affair, to be frank. Every Saturday they open their doors. The dead dolls make good food. The brewery makes good booze. No booking or entrance fee and open from midday to midnight, even Cinderella won’t miss out on anything.
The Dead Dolls Club, The London Fields Brewery, 370 Helmsley Place, E8 3RR
Images courtesy of Giovanna Del Sarto. 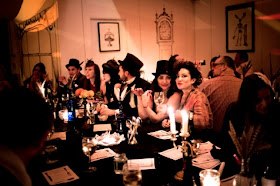 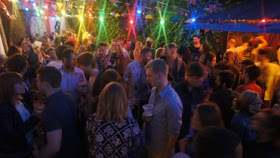 Frank’s Café and Campari Bar, Peckham
Everyone’s heading across the Thames and down south because South London has a heck of a lot to offer in terms of booze, bars and having a blast. Franks Café pop-up (below) opens every summer. Based on the tenth floor of a multi-storey car park in Peckham as part of the Bold Tendencies Sculpture Project, it’s not as glitzy and definitely no as glam sounding as some other pop-ups. But what it lacks in über coolness it makes up for with an urban cool vibe. Views of London, Campari cocktails and creative works of art. This is the place to be. Open until September.
Frank’s Café, 10th floor Peckham multi-storey car park, 95a Rye Lane, Peckham, SE15 4ST
Images courtesy of Flickr users Delaina Haslam and katsommers 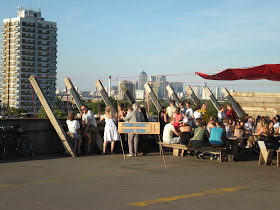 Propstore Café Bar, National Theatre, South Bank
Play spot the prop at the National Theatre’s latest production, the riverside Propstore Café Bar (below). Get up close (and maybe a bit personal) to a collection of thingummy bobs from the theatre’s plays including puppets from War Horse, the crocodile from Peter Pan and a few limbs from Frankenstein. All props play a supporting role to the menu. The snooker table top covered bar serves Meantime draught beer, English wines and cocktails made with Sipsmith spirits. Until September.
Propstore café Bar, National Theatre, South Bank, Belvedere Road, SE1 9PX
Images courtesy of Flickr users Guy Tyler and simonsimplese16 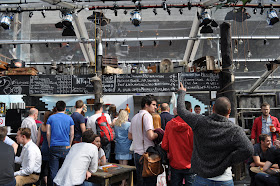 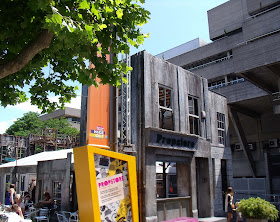 Roof Garden Café/Bar, Queen Elizabeth Hall
Are you feeling green-fingered and do you have a head for heights? Well The Queen Elizabeth Hall is the place to be in the last few hazy days of summer (I’d say you’ve got until September). Designed by the Eden project - the décor includes an allotment growing vegetables from around the world, a mini olive grove and wild flowers - and run by Company of Cooks, this hidden haven (below) serves very well as the South Bank’s secret sanctuary. Open from 10 in the morning to 10 at night the café serves savoury and sweet food while the bar mixes up some summer concoctions including the classic Pimm’s (glass or pitcher), an elderflower cup, and pale ale. Every Tuesday, from 11am to 1pm you can get your hands dirty and learn how to grow your own vegetables with the Drop-in Gardening class. Afterwards, reward yourself with a glass of Prosseco and a pastry snack.
Roof Garden Café/Bar, Queen Elizabeth Hall, Southbank Centre, Belvedere Road, SE1 8XX
Image courtesy of Flickr user Diamond Geezer 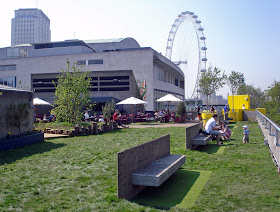