Pleased To Meat You Restaurants: BBQ Is Making A London Comeback 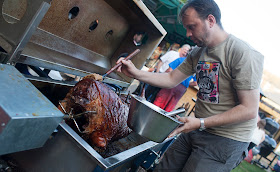 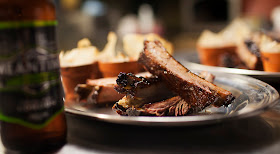 Recently I was lucky to attend a BBQ Pork Bonanza in south London, a sumptuous feast paired with ciders and beer. This delicious event was made all the better by the pork itself, which was provided by Dingley Dell, the home of happy, well looked after pigs. 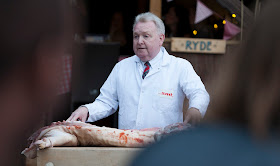 The event was held at The Leather Bottle in Earlsfield, a good pub with an amazing beer garden and pear tree to boot. I actually forgot I was in the middle of London. The event started with an amazing pig butchery demonstration, so we could see exactly where each cut came from and how it was done. It was truly fascinating, although my date for the evening didn't enjoy it as much as I did. The main event was, naturally, the giant spit roast pig that had been cooking for 16 hours. It wasn't just pork on it's own, though; each of the 6 courses had a particular Meantime beer or Suffolk cider pairing too.

This meaty gathering got me thinking about what there is available around London in terms meat and BBQ. While there are lots of restaurants that specialise in meaty treats, I don't think there's really enough. Hawksmoor restaurant is possibly the most popular. Opened originally in Spitalfields in 2005, it has expanded to two other restaurants in Covent Garden and Guildhall with a fourth restaurant in Piccadilly on the way. While it is more dedicated to steak and burgers, it does have delightful pork belly ribs and hotdogs. It's also the home to one of the best Bloody Mary cocktails I've ever had, which pairs very well with steak.

To book a table at Hawksmoor Spitalfields use the reservation calendar below.

Other prolific London restaurants in this steak category include the Argentinean restaurant chain Gaucho, the restaurant with a view of Borough Market Roast, the high-end restaurants popular with businessmen Goodmans in Mayfair.

BBQ restaurants are slowly on the rise in London, though I don't think there are enough of these restaurants either. Bodeans and Pitt Cue Co are the two well known BBQ joints providing ribs, pulled pork and beer all night. For a while now street food has been making a big comeback and there's one BBQ you should try: the Rib Man. Let us give thanks to the sheer genius of Mark Gevaux.

His playful and mind-blowing marinades/sauces have transformers the BBQ. He can be found starting the cooking process at 3am in preparation for 9am serving, which certainly displays his dedication. If you really like his ribs, then you can even buy his sauces and go meat crazy when you're at home. Sauces include the Christ on a Bike, Holy Fuck and Holy Mother of God hot sauces. Not in the mood for chewing meat from rib bones, then have a meat rib roll lathered in your favourite hot sauce instead.

While this isn't quite everything you can find, it's certainly the pick of the litter. I feel that if something is good, I will hear about it. It's finally time to change your preconceived ideas about BBQ from the terrible ribs found in TGI Friday’s to these London restaurants and street vendors.
Christian Rose-Day at 18:06
Share