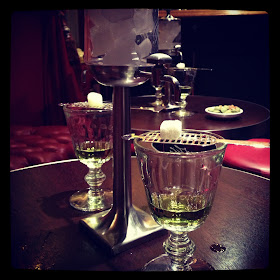 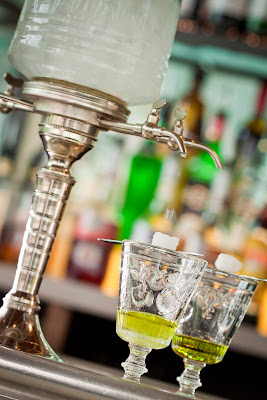 There are some days when a vodka tonic just won’t do. When a glass of champagne feels too light-hearted and a cognac feels too heavy. When you cock up at work, when you’re caught unexpectedly in the rain, when a relationship doesn’t turn out the way it was supposed to.

For one of those days, there’s always Absinthe. Otherwise known as the green fairy, Absinthe is the heralded emerald spirit, which bewitched Hemingway, Picasso and Degas. Oscar Wilde compared it to a sunset. Raymond Queneau said it was like a hot-air balloon that “broadens one’s imagination as the balloon broadens the view of the earth’s sphere.” What better antidote could there be to a day-gone-wrong?

First time round, the ‘Absinthe elixir’ had a bad rep. Initially banned in the US, it was labelled as an addictive, hallucinogenic drug. But these days if you’re looking for a Hunter S. Thompson style acid trip then you might be a bit disappointed. When my brave friend and I performed an Absinthe ritual at Brasserie Blanc in Covent Garden, we needn’t have been hesitant. Half an hour in, after dripping water over sugar cubes into Pernod’s Absinthe, we were setting the world to rights sip-by-sip.

We didn’t feel drunk. But by the time we’d reached the bottom of our ‘Green Beasts’ - which blurred Absinthe, cucumber and lime - life plans were afoot and lovers were understood. It seemed like Absinthe really did make the heart grow fonder.

As well as Brasserie Blanc’s selection, you can also find the elusive spirit below Brompton Bar and Grill in west London. Or, if you ask very nicely, the bartenders at Viajante in Bethnal Green might just serve you Hemingway’s favourite cocktail: Death in the Afternoon. (Ernest recommended 3-5, but 2 is my limit.)