The Search For The Best Fondue In London: Part Un 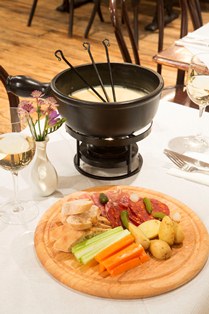 Some people nobly complete marathons for worthy causes, deftly running 26.2 miles through rain and wind or blazing heat. Others climb treacherous mountain terrain to reach new heights and share their heartfelt message with the world.

Me? I’m trekking my way across London in search of that elusive liquid gold: the perfect cheese fondue.

Virtuous? Oui. Brave? Bien sûr. There are no lengths to which I shall not go. Don’t get me wrong, I’m no saint. I just really, really, like cheese.

First stop on my cheesy quest was Bedford and Strand, a basement bistro just off The Strand which has just launched its very own fondue night.

Comprising both the cheese and chocolate varieties in a cunning double-whammy formation, I was hopeful that my search for fondue-nirvana might be a short-lived one.

The set-up was simple: one fondue contraption between four people; flame flickering seductively; and a hefty bowl of bubbling goo placed upon it. The table was adorned with bowls of bread bites, baby new potatoes and a platter of charcuterie. The stage was set. It was time. 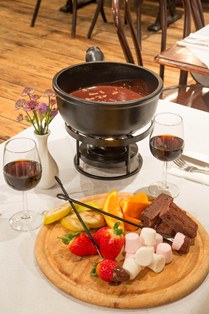 So what can I say? It was cheesy, yes - like a fabulous sauce for mac’n’cheese, or your mum’s secret recipe for cauliflower gratin - but I couldn’t have told you which cheeses were in it. It was good, but it wasn’t quite the thick, stringy, messy, potentially weaponised device I’ve seen in films and heard talk of from ski-season chums.

Put it this way: if it were in an episode of Scooby Doo, I couldn’t have tied the pesky villain up with the stuff. And what else would one look for in a fondue? It tasted good, and if you’re after a less-cheesy fondue (why? WHY?) then this might just be the one for you. But for me, it lacked a certain death-by-cheese je ne sais quoi.

In short: the search continues…
Christian Rose-Day at 11:12
Share